Skip to content
Part of what makes Egypt’s pyramids such iconic wonders of the world is the mystery surrounding their construction. Now, a new discovery could shed light on the methods used to create the epic structures.

The ramp system was uncovered at Hatnub, an ancient quarry site in the Eastern Desert in Egypt.

Archaeologists from the French Institute for Oriental Archaeology in Cairo and the University of Liverpool in England believe the large, steep ramp was used to transport alabaster stones from the quarry, and that this system was also used to construct the Great Pyramid. 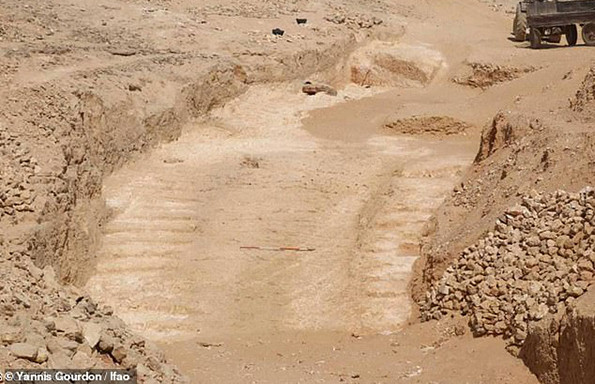 “We discovered an extremely well preserved ramp leading up out of the quarry, with traces of post holes that will enable us to reconstruct in more detail the ancient technologies of stone haulage and extraction,” Dr Roland Enmarch said.

The ramp is flanked by two staircases where ropes would have been tied to the post holes.

Three Giza Pyramids were built for ancient Egypt’s pharaohs – Khufu, Khafre and Menkaure. The largest is the Great Pyramid, built for Khufu.

“The study of the tool marks and the presence of two [of] Khufu’s inscriptions led us to the conclusion that this system dates back at least to Khufu’s reign, the builder of the Great Pyramid in Giza,” Yannis Gourdon, co-director of the joint mission at Hatnub said. This suggests ancient Egyptians were able to move large stones up steep slopes during this time.