Skip to content
The Synod of the Ecumenical Patriarchate of Constantinople has decided to begin the creation of an autocephalous Orthodox Church in Ukraine. The move comes despite warnings against it from the Russian Orthodox Church.

The Patriarchate of Constantinople intends to unilaterally declare recognition of a separate canonical church in Ukraine, although details of such an action are yet to be clarified. The conclave of its Synod took some decisions furthering such a policy. The Church in Moscow considers them destructive and says they could potentially cause violence in Ukraine.

Among the decisions taken on Thursday was to revoke the legally binding status of a 1686 letter, in which Constantinople acknowledged the right of the Russian Orthodox Church to ordain the Metropolitan of Kyiv after his election by clerics of the Ukrainian Orthodox Church.

The Synod also decided to re-establish the office of the Stavropegionof the Ecumenical Patriarch in Kyiv. The term means that the office will be held by a person with direct canonical allegiance do the Patriarch of Constantinople.

The Constantinople Patriarchate also decided to canonically reinstate two leaders of schismatic Orthodox churches in Ukraine, Filaret Denisenko and Makariy Maletych, as well as their followers. Both are considered unfit to be Orthodox clerics by Moscow after they defected from the Ukrainian Orthodox Church.

The announcement by Constantinople was criticized by the Russian Orthodox Church, which called it the “legalization of the schism.”

“The actions of Constantinople cross the red line and deal a catastrophic blow to the unity of the global Orthodoxy,” said Aleksandr Volkov, spokesman for Patriarch Kirill, the head of the church.

Vladimir Legoyda, who chairs the Church’s public relations department, called the decisions “anticanonical” and an “attempt to destroy the foundation of the canonical orthodox order.” He added that the reaction to Constantinople’s move will be discussed by the Synod of the Russian Orthodox Church next Monday.

Volkov said that Moscow will now have to declare that it is no longer in communion with Constantinople, since the latter decided to treat Filaret and Makariy as clerics. This means that priests of the two patriarchies will no longer be able to conduct religious services together. Moscow has already taken a step that amounts to breaking diplomatic ties with Constantinople in response to its Ukrainian activities. 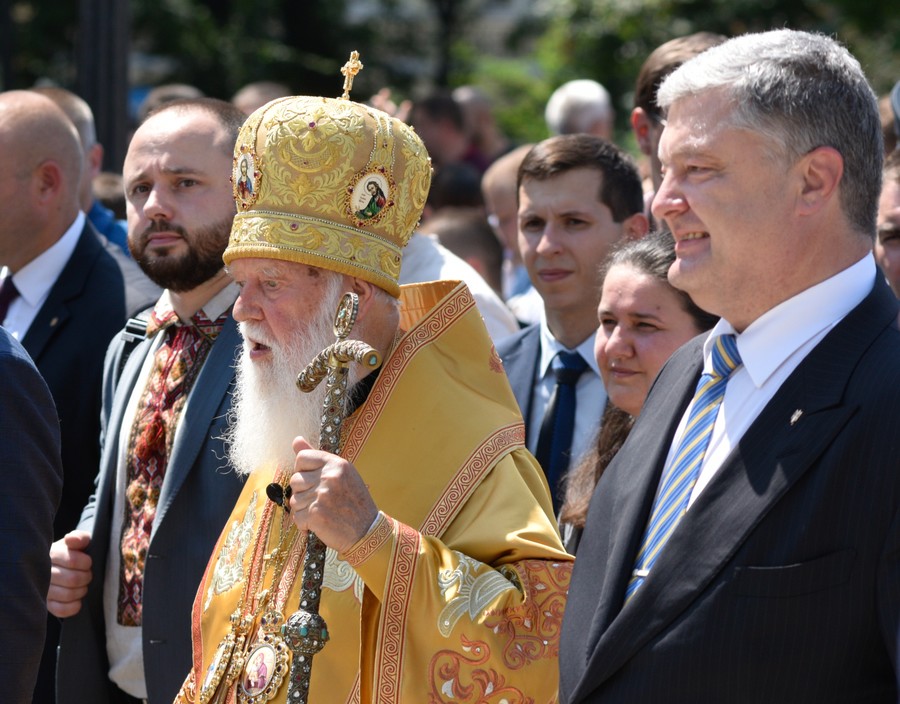 Filaret praised the decision, saying it brings closer the creation of a single Ukrainian church independent from Moscow. His recognition as a legitimate cleric by one of the canonical Orthodox churches probably boosts the chances of him heading such a church one day.

Petro Poroshenko, the president of Ukraine who made the creation of an autocephalous Orthodox church part of his re-election platform, promised that Kiev would respect the people, who would choose to stay part of the Moscow-linked church. Moscow has been complaining for years that Ukrainian officials were turning a blind eye to acts like the seizure of the property owned by the Ukrainian Orthodox Church by the schismatic churches.

I wonder which part of this catchy slogan, run by Poroshenko re-election campaign, is about the proverbial "European values" they promised on Maidan. 🤔🤔🤔

"Army!
Language!
Faith!
We are Ukraine,
We are going our own way!" pic.twitter.com/nHaGgmOudY

The Synod in Constantinople is aware of such concerns. In its announcement, it appealed “to all sides” to “avoid appropriation of churches, monasteries and other properties, as well as every other act of violence and retaliation.”

The Ecumenical Patriarchate of Constantinople is considered “first among equals” with regard to Orthodox churches around the world due to its historic significance. Its decisions however are not binding for other churches. The Russian Orthodox Church is in a sense a rival of Constantinople for influence among Orthodox believers. There are some churches recognized by Moscow, but not Constantinople, and vice-versa.

Orthodox believers in Ukraine used to be part of Constantinople’s ‘spiritual territory, ’but the Kievan metropolis was transferred to Moscow’s jurisdiction by Dionysius IV in 1686. The move, made Thursday, by Constantinople is meant to revoke this transfer after more than three centuries.